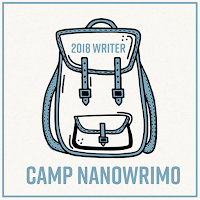 Well, with this round of Camp Nanowrimo heading into the final 17 hours I can safely say I will NOT be "winning" this time around, seeing as I would need to do 16 more hours of writing to meet my goal and I do have a job to go to shortly. I did, however, succeed in writing three new short plays this month, made great progress on two longer plays, and started two picture books. So it was still a pretty good run.

I actually made the decision not to finish yesterday, and was leaning towards that decision on Saturday. As soon as I looked at all the things I wanted to do with the past weekend and realized it was either do those things and write for a few hours or forget having a weekend at all and just write, I chose the more balanced approach.

When I was younger I surely would have surrendered my whole weekend to an online writing challenge, but as I stated in my project listing on the Camp Nanowrimo website:


The real goal is not the final tally though; if I get far behind and have to catch up at the end of the month I'll have missed the point. Rebuilding a daily writing habit is the goal.

Of course I got ahead of myself and chose a goal based on writing every day AND writing for another few hours on every day out of the month that I wasn't at work. So I set a target of 46 hours of writing in April. My count currently sits at 30, but will go up by an hour or two before the end of the day. I didn't write every day, but I did write more days than not. More importantly, I figured out a few things I will try out in the coming month to keep the train rolling:

Writing in the Mornings

This whole month I was trying to put aside an hour to write when I got home from work in the evenings, but sometimes when I got home I was worn out, or frustrated, or distracted by the excitement of a work project. Also, I got home at different times and had different evening commitments, making it hard to feel like a habit was forming.

And yet I have a daily habit that I formed much by accident - morning Sodoku. After getting into doing the puzzles in the paper last year, I was given a Page a Day Sodoku calendar and a Sodoku book for Christmas and have done one every morning for all of 2018. The original idea was to do them on the bus during my commute, but that backed up to during my morning coffee, whether or not I was going to work.

So as of this morning, I'm switching to morning writing. One hour in the Sodoku slot, and the puzzle can come after. Of course I may choose to write longer on days that I'm home or write again in the evenings, but I'm going to try starting my day with writing, before other things can crowd in and get on my mind. 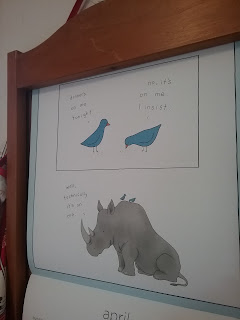 I mentioned in my Camp Nano Halfway Point blog post that I was interested in Jerry Seinfeld's idea of putting a big red X through the calendar on every day that you wrote (in his case, new jokes) so that you would get a nice visual chain going that you didn't want to break. The problem I ran into is that our only wall calendar is "The Little World of Liz Climo" and I like the look of it so much that I actually didn't like putting big red Xs on it, so the satisfaction I was supposed to get from seeing them was marred.

My next thought was to go by another calendar just for that purpose, but just last night it occurred to me that perhaps digital is the way to go. I threw together a red X writing tally page for myself in Google Docs, and set it to open up every time I launch chrome: 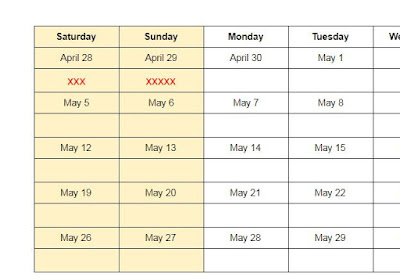 I've also gone with Deep Work author Cal Newport's suggestion to tally how much time you spend focused on your most important task, so instead of just one X for writing at all it's an X for every hour. I'll see this every time I want to go online, so if I've somehow missed my morning writing hour I'll have a big reminder of that pop-up in my face before I can get to my email or social media or anywhere else on the web.

So with those tweaks, a plan to rearrange our creative space, and new on-the-go projects to get finished, I'm heading into May with the continuing goal to write every day, and more. Camp Nanowrimo takes place again in July; I'll decide closer to the date if I want to do it again. If all goes well that would be with a project-based goal, since I'll hopefully have this regular-writing habit locked in by then.


Did you go to Camp Nanowrimo? If so, how'd it go? Or what writing habits work for you?