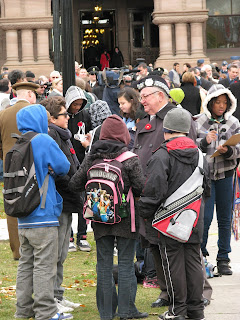 In school, we always paid special attention to Remembrance Day. There were crafts and poems and assemblies to attend and, in later years, assemblies to put on. One of my most distinct Remembrance Day memories from my youth actually comes from high school, and the pride I felt the first time I was a techie at the student-run assembly. What I don't remember is ever having a veteran come and speak to us. When I was a kid, the two minutes of silence was spent imagining what the World Wars had been like; imagining the crack of bullets and the flash of explosions and the cold trenches slick with mud... 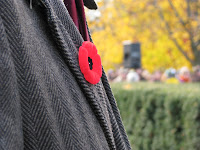 In 2003, I had just slammed the door of the company van when "Last Post" came piping through the outdoor speakers in the Home Depot parking lot. At first I didn't understand what was happening. Then, terribly ashamed of myself, I stopped and stood with my production assistant shopping list clutched in one hand, and did my best to imagine/remember.

Some people kept moving, but a few others stopped, too.

At the Menin Gate in Ieper (Ypres) the Last Post is played every night at 8 pm. On July 9th, 2015 the Last Post Association will sound it for the 30,000th time. 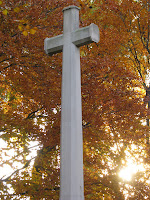 In November of 2005 I was in Calgary to see a play I wrote performed for the first time. I can't recall what I was doing on the morning of the eleventh, although there's a hazy memory of a church-basement rehearsal being paused so as not to disrupt a ceremony upstairs.

I have one very sharp memory of that November, however. There were stories in the news of a rash of stolen poppy boxes in Calgary. Everyone was furious of course, and there was a lot of muttering and head-shaking and what's-wrong-with-people-these-days going on. But for most of us, that indignation felt like enough. 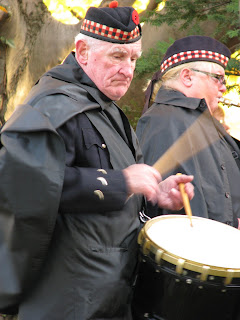 Then, a day or two before the eleventh, one of the actors arrived in that church basement charged up and shaken — still shaking, even. After some prodding, he told us that on the way to rehearsal, he'd seen a veteran offering poppies. The actor had already made his donation, but thinking about the Poppy Fund money lost to the robbers, he wanted to give more. Now, my memory of this part is a little hazy, but the actor either had no change to put in the box, or he only had a little. Either way, as he walked on, he got more and more upset at the thought of giving so little to people who had given so much. The desire to do more filled him to bursting. He hurried to a bank machine, withdrew a hundred dollars, and ran back to the surprised and grateful veteran. No, no, the actor assured him, we're the ones who are grateful.

Did you know you don't have to be a veteran to join the Legion? If you're a citizen of Canada or a Commonwealth or NATO/Wartime Allied country, and you're 18 or over, you can join and show your support year-round. 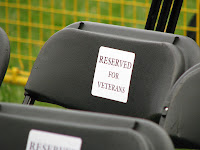 I think hearing that story was a turning point for me. In the next few years I started making the time even if I was at work. More recently, I graduated to attending the big Remembrance Day Ceremonies around Toronto: Queen's Park, City Hall, Fort York, and the sunrise ceremony at Prospect Cemetery. I took a lot of photos at each, which felt like a way for me to pay more attention and connect more closely with the day.

In the past week, I've been looking at those photos a lot. I was thinking of putting together an album or a video to share for this year. But then, as I was looking at the photos, I started to notice all of the other people with cameras. Big cameras, and tripods, and video cameras or even plain old audio recorders. And looking at the politicians and the other dignitaries who weren't veterans at all, I started to wonder if I was once again losing focus.

But of course in those photos are the veterans too, and the current generation of servicemen and women. Looking again, I began to notice the other people in the photos, all the people who were just standing and watching and listening. All of those who had come not to record or report, but just to remember. 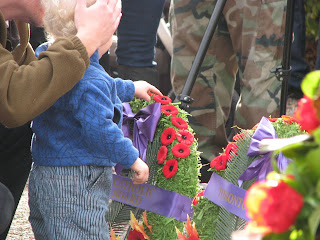 I'm still glad I went and took all those photos. And I may well go back to the big ceremonies again — veterans are deserving of all the pride and pageantry Canada can muster, and every single public figure should be present at a ceremony. But this year, I decided to go somewhere with a little less polish and pomp.

You don't have to wait for the lapel poppies to start appearing each year before you can show your support; the Royal Canadian Legion website sells poppy hats, mitts, bags and more.


The local Legion Branch is just a few blocks from our house, so I arrived a good fifteen minutes early. I was worried by how few people were there; at Queen's Park the lawn would already be crowded. But as the hour drew near, so too did the people...

They appeared around all corners, coming in twos and threes and fours. Some were dressed up for the occasion, others were in jeans and carrying coffee in paper cups. Some people found a place on the far sidewalk, alone, while others clustered and chatted on the street in front of the cenotaph. Cars pulled up and lined the curb; four firefighters lined up in front of a firetruck they had parked in the middle of the road. There were dogs enjoying being out with their people, and children who may have been enjoying being out of school, or may have had a better sense of solemnity than the adults that held their hands. One girl, no more than eight, did her best to mimic the stranger in the kilt who stood beside her as he followed the commands of the sergeant-at-arms to stand at attention, then at ease. Her feet apart, her hands folded behind her, she didn't put her hood up when the rain began.

The bugle songs were recorded, but the piper was live. The names were read of branch members who had passed away since last November. Wreath-layers and flag-bearers were also called by name. Les (who if I heard right is 97) was escorted around to lay his wreath where the ground was level, when it became clear that the stairs to the cenotaph would be too much. These were friends and families and strangers; this was a community.

I still took photos, but only at the end, after we were all invited to add our poppies to the cenotaph if we liked, and head inside for refreshments. I went in to the Legion hall and looked around, reading names of those who had fallen years ago and months ago alike. But I didn't stay for long. Groups were forming at the tables, and a line was forming at the bar. There was laughter and chatter, and a table of food that was to remain untouched until grace was said.


Now, during those two minutes of silence, when I think about those who have served, I no longer try to imagine living among bullets and bombs, or being scared in a foreign land like I did when I was a kid. 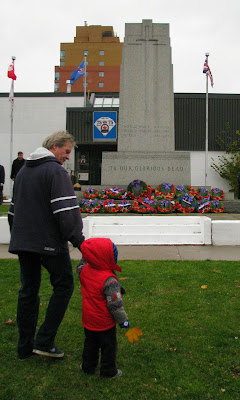