Word on the Street and My First Story Mob

It's not like I didn't know The Word on the Street Festival was coming. WOTS happens every September in cities across Canada, and Steve and I try to go to the Toronto installment at Queen's Park every year. I went to Winnipeg last week knowing this annual "celebration of literacy and the written word" was happening the Sunday we got back, but I still didn't bother looking at the schedule of events. My plan was to just go and wander around and see what we could see...


Luckily, checking Twitter while lingering over coffee on Sunday morning saved me from missing out on hearing Elizabeth Wein, the author of Code Name Verity, read from her new book, Rose Under Fire. She tweeted (from @EWein2412) that she'd arrived in Toronto, and I put two and two together (because I'm clever like that. Also because I went to the WOTS website to confirm my suspicion).

If you haven't read Code Name Verity, stop doing anything else, at all, and go do that now. It's set during World War II, and it's about two women who are involved in the war, and there are planes, and I don't want to say much more because it is one of those books that you don't want to spoil at all, for anyone. But it doesn't matter if you don't usually like historical fiction or don't usually read books classified as YA - you should still read it, promptly.

Having said that, I'll admit I haven't read Rose Under Fire yet. I was worried that attending Wein's reading and talk at WOTS could spoil something for me, and I actually do know more now than I would have liked, but I can live with the tidbits I found out.

We stuck around to get my copy of Code Name Verity signed - which of course I only knew to bring with me thanks to Twitter. Wein was personable, and in telling her my Twitter story I totally forgot to mention how much I loved Verity. Hopefully she got the idea. 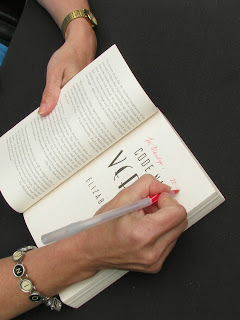 Oh, and she also had a great necklace - from a distance you thought it was a cross, but up close you can see that it's actually a little silver plane. Very fitting.

While we were waiting in line to get Verity signed, I spotted a man in a top hat and goggles, and pointed out to Steve that there was "some kind of steampunk thing" going on. Then the crowd moved a little, and when I saw who the man was with, I realized I already knew exactly what kind of steampunk was going on. Puppet steampunk. 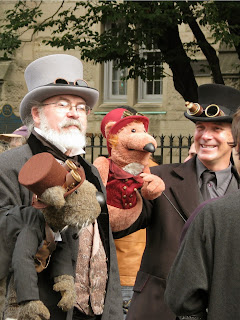 That's Rob Mills and Ruffus the Dog on the left, Carlos the Weasel and Fred Stinson on the right. Ruffus, a book-loving dog who lives in a library, started his entertainment career on television, but he's since moved to the web. That's where I discovered him, via Ruffus the Dog's Christmas Carol. As a big fan of puppets (and an amateur puppeteer and would-be puppet builder myself) I was excited to see Ruffus out promoting his current project - Ruffus the Dog's Steampunk Adventure - and the associated IndieGoGo campaign.

Although I was stuck in line, Ruffus saw me trying to get a picture, and was nice enough to oblige me with a wave above the crowd. 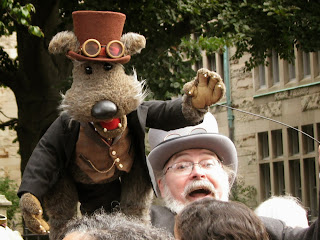 Check out his Facebook page to see photos of some of the friends he made at WOTS.

It's Probably a Good Thing I Missed Thomas King... 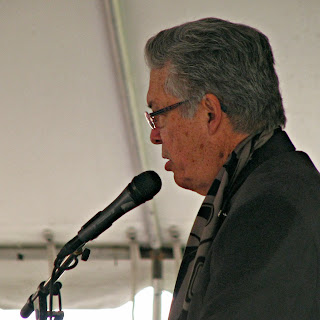 Thomas King has long been one of my favourite authors, but I didn't know he was going to be at The Word on the Street until I saw that he'd be taking to the Remarkable Reads stage shortly after Elizabeth Wein finished. One part of me is disappointed I didn't get my as-of-yet-unread copy of The Inconvenient Indian signed, and that I could barely hear him from our place in line. However, I have a history of embarrassing myself in front of Mr. King, so it's probably for the best that I stayed a safe distance away.

Our final adventure (aside from scouring the booths and books sales!) was watching a StoryMob invade the festival to present Boy Soup by Loris Lesynski. 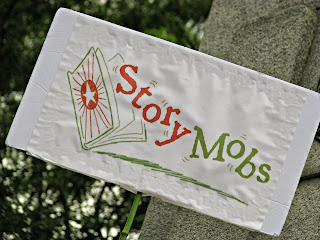 StoryMobs are a very cool project that's been started this year by a group of local women who love children's books and came up with a brilliant way to turn reading into an event.

A book is selected, a "script" is written that breaks the book into reading parts and actions, and a date is announced. Then people can sign up to be a reader or just make props and costumes in advance. The day before the mob is set to take place the location is finally announced, and participants meet up at a designated location for a quick run-through before parading to a public spot and presenting the book to anyone who happens to be there. Just like a flash mob, the participants disperse afterwards, but not before many of them donate the copy of the book they brought to the Children's Book Bank.

I've wanted to go to every StoryMob since the first, but the timing and location just never worked out for me - until now. We didn't participate (this time!), but we made sure we were in the right place at the right time to see the mob do their thing... 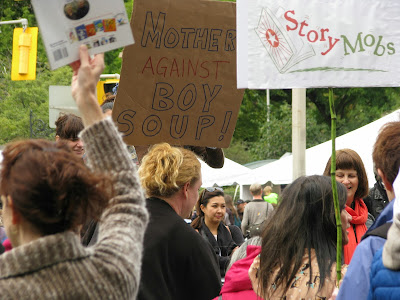 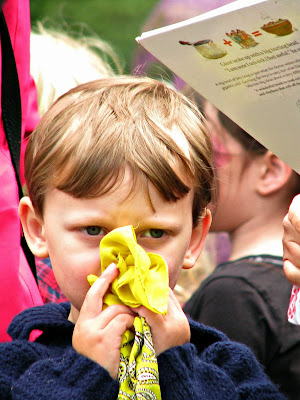 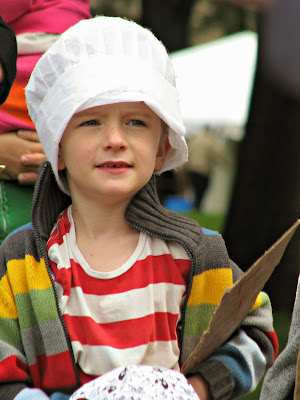 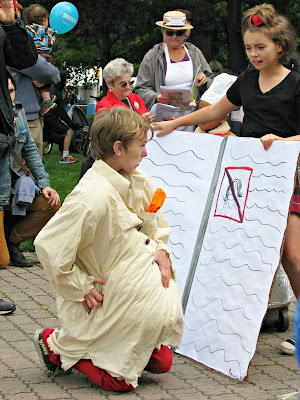 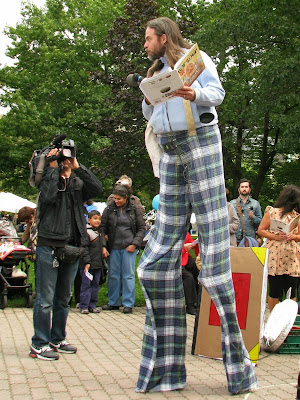 Actually, I took a lot of photos, and this blog post could easily go scrolling off into ridiculousness. Instead, I've added a StoryMobs photo album to my Facebook Page, where you can see some of the others.

So, were you at Word on the Street? How was your day?

P.S. I almost forgot! We learned at WOTS that there's a "StoryMobs Sr." event planned for Nuit Blanche on October 4, based on Alice in Wonderland. Keep an eye on StoryMobs.ca for updates!

P.P.S. My understanding is that people involved in the StoryMobs have agreed to have photos taken and shared, however if you see a photo of yourself or your child here or in the Facebook album and you'd like it taken down, please just get in touch.