Hope for the Real Princess Merida

So, I'm a little late to the party on this one, but apparently Disney/Pixar stirred up some controversy a week or two ago when they announced that Merida, the hero of Brave, was going to be officially named the 11th Disney Princess during a "coronation ceremony" planned for today, May 11th.

As part of the announcement, they released new 2D images of Merida that will be used on some merchandise. Girl geek culture site The Mary Sue wrote with some disappointment about the new look, calling it "generic-seeming", although noting that the addition of the tartan was a nice touch: 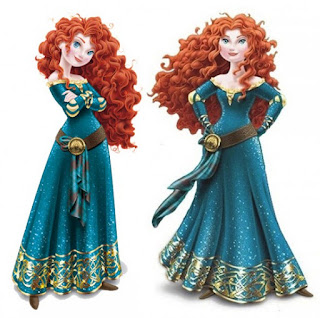 I don't know who first wrote about the change critically, but the Mary Sue article led to a Facebook post from the website A Mighty Girl and, eventually, a petition against the "Merida makeover."  Various Facebook users and petition signers noted that Merida's waist is skinnier, her hair is tamer, her dress is lower-cut and fancier, her cheekbones are higher, she looks older, and she isn't carrying her trademark bow.

Now I only caught wind of all of this today which, as you'll recall, was "coronation day." One of the first things I came across as I tried to read more about the makeover controversy was a video of the ceremony, which was held this morning at Walt Disney's Magic Kingdom theme park.

And the video is why I titled this post the way I did.

It's almost ten minutes long, so if you don't want to watch the whole thing, here are what I consider the important bits:

Now, I'm not a big fan of Disney's Princess culture push. There are many problems with the idea as a whole, but I could turn that into a rather long post of its own. At this point, though, the popularity of the Disney Princesses is a reality. So it pleases me that they may be willing to broaden the definition.

I guess the real test will be how Merida comes across in future appearances of the Disney Princesses, and whether or not they choose to back off on the redesign. What I really hope is that rather than further homogenization, the Powers that Be at Disney will see Merida's inclusion in the group as an opportunity to rediscover and reestablish the traits that made the other characters unique.

Oh, and speaking of broadening the definition of "princess", I also found this Merida-themed video from Disney's "I am a Princess" campaign, published today and celebrating a real-life girl who loves archery:


Again, the whole campaign merits a blog post or two of its own, but if you're not familiar with any of these videos, this is a good place to start: