There's Something About Angus

In which I ramble about animation choices, a topic on which I have absolutely zero expertise.  (If you already know all about using white rims to humanize the eyes of drawn animals, you may want to skip down to the "But What About Angus?" section.)

[I took the photos in this post; all images from Disney films were available on the official movie download and gallery pages available at Disney.go.com/brave, Disney.go.com/up,and Disney.go.com/tangled  Some images have been cropped for commentary purposes.]

The first time I saw Disney Pixar's Brave, I paid a lot of attention to the way the animals' eyes were animated.  If you've seen the movie, you probably noticed it too, although you may not have noticed yourself noticing it.

The thing is, in real life you don't see much of the whites (or sclera) of many animals' eyes, unless they are looking sideways or are angry/scared/upset.  Yet cartoonishly animated animals are often drawn with quite a bit of white showing, presumably to make the character seem more human.

Here the eyes of various dogs who are looking straight ahead:

You can see little to no white, which is normal for a relaxed dog (admittedly, this isn't necessarily the case for droopy- or squooshy-faced dogs; some pugs, Boston terriers and even boxers show sclera all the time).

Here, on the other hand, are Doug and Alpha, from Disney Pixar's UP: 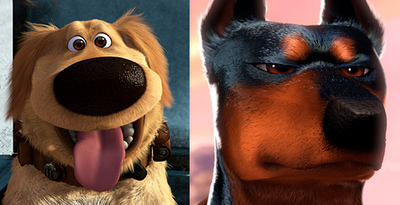 Hero-dog Doug's eyes are more white than brown and even "bad dog" Alpha is showing some very human whites in the corners (Gamma and Beta show even less than Alpha, but they're less important characters).  Also, Doug's eyes especially have been moved more to the center of the face, rather than the sides.


For Brave, this long-standing animation convention was used to make a distinction between animals and [VAGUE SPOILERS AHEAD] people who had been turned into animals.  If you're an animal proper, no whites.  If you're a person trapped in animal form, bring on the visible sclera! (Unless of course you began to loose touch with your humanity...)

There was some discussion of this on the Animation World Network blog.  As Joe Strike writes in his review of Brave [which makes the SPOILER more specific]:


"Where would Disney animation be without animals expressing human emotions? Apart from body language, it’s all in the eyes: for the most part animals don’t have flexible eyebrows or visible white around the iris. (More than once the ursine Elinor turns dangerously feral, followed by an aghast ‘what have I done?’ expression once rational again.) "

The twins threw this off a little - unlike with their mom, the animators seemed to mostly rely on blue irises for the human effect:

Still, it's the same idea - the colouring of the eyes is carefully chosen to make animals seem more human.

But What About Angus?

So this made things strange for Angus, Merida's horse.  He's a prominent character, and if he had been in any other Disney movie, he almost certainly would have had eyes similar to those of Samson, Maximus, Major, Frou Frou or Phillipe.  Although some of the downloads and promotional images of Angus show a little white around his eyes, the actual movie rarely did (only when he was looking sideways or he was upset - like many real animals).


Here's what director Mark Andrews said when asked about Maximus vs. Angus by Movies.ie:


"The thing about Tangled is that it was a straight up comedy and was super characterised; horses eyes are on the sides of their heads and they brought them right up to the front so it was more Madagascar-esque with it's movement and stuff. It was funny, but it wasn't a horse. We wanted a horse, a real horse in a real setting, where you could feel the atmosphere and feel the breath and everything but it had to still be a character. I think that's what defines Pixar films; that we don't go for the easy comedic stuff, we want it to have an honesty and a reality to it, while delivering the humour and the drama too."

I'd say they succeeded at what they set out to do.

BUT  (and this is the part I only noticed after seeing the film in theatres for the second time):

There's a final montage that shows Merida and Angus with - well, I'll leave out even more spoilers and just say "a second rider on a second horse".  In this short scene, both the second horse AND Angus are showing more whites around their eyes than Angus has shown previously. Not Maximus-level white of course (and obviously Angus' eyes didn't migrate to the front of his face), but it was still enough that I found it noticeable.

So why did I dedicate an epic blog post to that very minor detail?  I guess it's because I find the thought that went into that fascinating.  Presumably someone, somewhere in the Pixar chain of command had to say "Oh, yeah, and since all's right with the world now, the horses can be more personable for this 20 second scene".  I absolutely love how much care and consideration for the world of the story goes into a decision like that.

Or maybe I'm reading too much into this and they simply gave that scene to a junior animation team who didn't get the sclera memo.  But I very much doubt it.

Seriously, you're still reading?  Okay then.  In La Luna, the Pixar short that played before Brave, important eye-animation choices also came into play.  For the first part, the eyes of the two older characters couldn't be seen under their bushy eyebrows (this is even mentioned in the "Characters" section on the official La Luna page).  But when the wide-eyed young boy's actions fill his mentors with wonder, their eyes open wide and are visible for the first time.  More interesting, I think, is that from that point on, their eyes remain visible.

Pixar animators, you are the awesome.