Clean Up at Mimico Creek

This morning I took part in a Great Canadian Shoreline Cleanup event, getting down n' dirty on the banks of the Mimico Creek (I'm not kidding about the dirty part - it poured rain for most of yesterday, so the mud was good and squelchy!)


Obviously I went into the event happy to be participating, but that was because I believe in the cause and was excited for the end result.  But I wasn't at it long before I realized I was actually enjoying the work itself.

First of all, I was out by the water on a downright glorious fall day.  Then there was the fact that picking up litter is one of those activities where you can see the impact you're having as you work, which is something I don't come by a lot as a writer.  Finally - and this part is a little weird, I admit - I liked that the cleanup involved clambering up and down muddy banks, digging out half-buried metal cans, and generally doing lots of bending and reaching and ducking under branches and brush.  Basically, I felt like a kid out hunting for treasure who wasn't worried about getting in trouble for the mess.
Oh, and I found a hat that had been taken over by moss.  Which was pretty awesome, and which was returned to the mossy spot from whence it came. 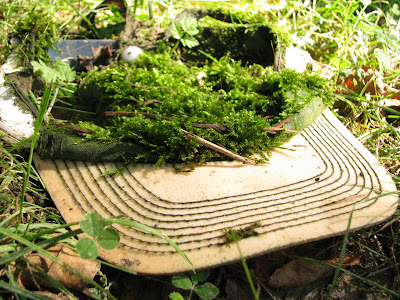 Afterward Steve met me for lunch and on the way home, we saw a groundhog.  So it's been a great day already, and there's still a new Doctor Who on the way tonight.  I dare say, huh and zah.