Today the big park near our house was having its first ever "Spring Bird Festival", so Steve and I went to see what we could see (which turned out to be quite a bit).

The first booth we came to had volunteers from the University of Guelph's Wildlife Education & Environmental Programs (WEEP), who had brought along four birds of prey who are unreleasable to the wild.  Steve was surprised that Einstein the Great Horned Owl was so big, but the volunteers said he is on the large side for his species. 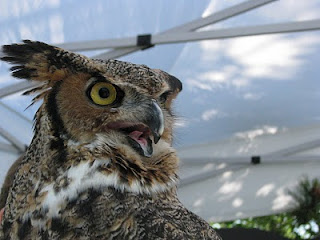 "Here's a theory of relativity: I'm relatively huge!"
What I couldn't believe was that the kestrel they had was so small. Okay, so her missing tail feathers may have made her seem a little smaller than usual, but still... In birding guidebooks and such, the American Kestrel is often described as being similar in size to an American Robin.  Now I don't know how often birds face off Sharks v. Jets-style,  but if kestrels and robins were ever to throw down, I'm no longer convinced I'd put my money on the bird of prey. 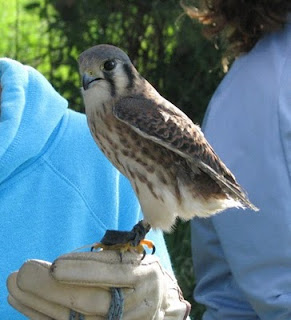 "What did that robin just say about me?"
After the WEEP display there were a lot of booths from local organizations, where Steve and I respectfully browsed and chatted and such, but I'd already been to most of the groups' websites.  What we were really looking for was the snake display promised in the event flyer.  Still, we found the table a little too early, as all there was to see were empty tanks.  So we walked a loop along a park trail and while we were killing time waiting to see captive snakes, we saw a not-so-captive one!  The fairly large Garter Snake skedaddled back into the bushes as soon as he saw us - apparently he had no interest in attending a Spring People Festival.

After grabbing some bird-friendly coffee from Birds and Beans (which was most tasty), we heard a little girl variously shrieking and giggling, and realized the snakes were out and about.  The little girl wasn't willing to hold the snake, but she was willing to touch it while her amused dad took pictures. Steve and I, on the other hand, were both up for some Eastern Milk Snake wrangling.  Juggling the coffees and my camera got a little awkward, but with the help of the assistant from Sciensational Sssnakes!! we got it sorted out. 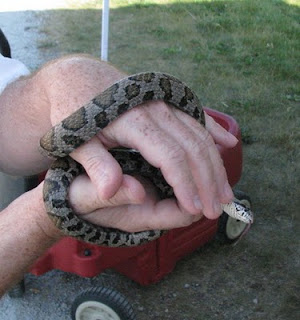 Steve shows that girl how it's done.
After the Eastern Milk Snake, we petted a Corn Snake who was surprisingly soft.  Steve listened intently while the owner of Sciensational Sssnakes!! talked about Corn Snakes as pets... perhaps a little too intently.  Not that I'd mind having a snake in the house, but I'm not sure the cats would approve, no matter how soft it may be.
All labels Bird Pics Life Mac Nature Toronto